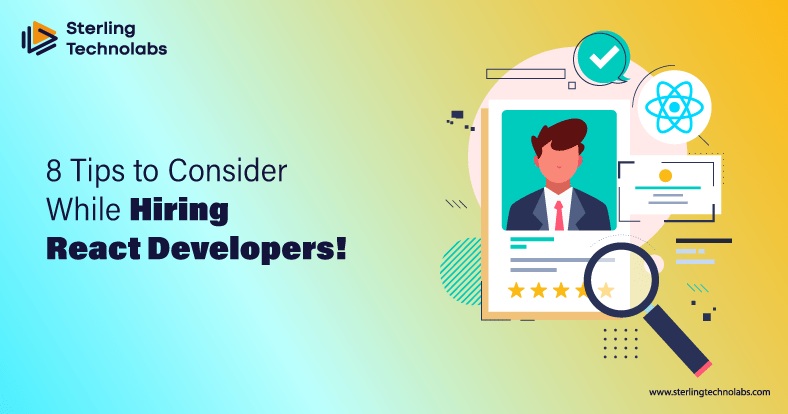 React is used by more than 9750 well-known enterprises and 90,000 websites worldwide. Some well-known apps created using React include Netflix, Amazon, Instagram, and Codecademy. The Stackoverflow 2020 developers poll found that 68.9% of developers are interested in continuing to use React. Additionally, because of its ability to provide a productive atmosphere, it took the second position as the most popular web framework. The simplicity, adaptability, quicker rendering, and capability to build interactive user interfaces are the key drivers of its appeal.

React has all the qualities needed to create a high-performing web project, but it only performs to its full potential when it is in the proper hands. For instance, let’s assume that your team of React engineers has extensive knowledge of tech topics like JavaScript and has expertise in managing challenging projects. They have a greater chance of taking full advantage of what React has to offer in such a situation.

However, it’s critical to assess a React developer’s familiarity with related technologies as well as many other factors before hiring them. This article teaches you to the questions and requirements that will inevitably serve as a filter throughout your search for React developers to interview.

Let’s first examine the main responsibilities of a React developer before moving on to hiring advice. Let’s delve further into the specifics.

Developers of React are Accountable

A React developer’s responsibilities include:

The widespread use of React places tremendous demands on React developers in this cutthroat industry. After all, you need a qualified developer who can carry out particular duties and meet commitments. Right? Therefore, let’s go through certain qualities that are crucial to consider while hiring React developers.

Are they Proficient in JavaScript & ECMA Script?

Since React is a JavaScript library, a developer for React must be well-versed in JavaScript’s operations, features, and syntax. Additionally, hoisting, prototypal inheritance, DOM manipulation, event bubbling, and function knowledge are crucial for developers.

In addition, ECMA Script is essential for creating React apps since it enables developers to write code in a single line and condense the JS code by using the Destructuring functionality. Since finding React engineers might be challenging or expensive, developers with limited experience in React but extensive experience in JavaScript and ECMA Script can make a great addition to your team.

Are they Outstanding in Related Technologies?

For a Reactjs developer, mastery of one framework or related technology is insufficient. He or she needs to have prior expertise dealing with various React-compatible technologies. We are all aware that a backend platform or framework is necessary to host a React application. React can coexist with Laravel, Django, and Ruby on Rails. Therefore, having an understanding of these technologies provides every developer with a distinct advantage.

In addition, one needs to be proficient with MERN Stack (MongoDB, Express JS, React JS, and Node JS). After all, the MERN stack is the one that developers like to use when creating full-stack JavaScript apps, and it is also the backend technology that is most compatible with React.

Additionally, Express, a Node.js framework, is seen to match well with React for developing scalable apps. Without a doubt, the Express-React combination manages the server load and simultaneous requests the best. Overall, React applications may be successfully created by developers with creative ideas and an in-depth understanding of related technologies and frameworks.

Do they have a Fundamental Grasp of Testing Tools and Frameworks?

Testing has turned into a crucial skill for React developers as a result of the growing demand for speedy deployment throughout the development process. Unit, end-to-end, and integration testing for React code may be done using a variety of tools and frameworks. Among the most popular frameworks and tools are:

Developers may avoid mistakes and produce better code by being aware of how various testing tools and frameworks operate. After all, the more time and money you are able to save by finding and fixing errors quickly. Therefore, click the box next to testing proficiency in your technical evaluations when employing React engineers.

Are they Knowledgeable About JavaScript Build Tools?

Installing several software programmes and tools is necessary for React developers in order to manage dependencies, optimise assets for production, operate the development web server, file watcher, browser reloader, and many other things. To expand the React framework, many JavaScript tools are therefore needed. Several of the build tools frequently utilised in React apps include:

These technologies also assist developers in automating a number of repetitive processes while they are working on a project. Additionally, a solid grasp of installing and maintaining packages using build tools shortens the JavaScript development process and boosts productivity.

Do they have Any Experience with Version Control Systems?

Imagine you’re a developer on a challenging software project that necessitates regular code updates and collaboration between several devs. In these situations, the version control system aids in code management and speeds the development process.

It makes sense to offer precedence to developers who have worked with version control systems. They can use it to maintain tabs on changes to a particular development project. Additionally, it enables examining older codes, comparing them to more recent codes, and fixing errors in the most recent updates much easier and quicker.

Numerous version control programmes are used by developers, including Git, SVN, TFS, and Mercurial, to mention a few. Developers favour Git over other systems for hosting code, such as GitHub, Bitbucket, and GitLab. Developers may control the commit history and pull code from their own repository using Git. Therefore, the ability to monitor various versions of files using the push, pull, add, and commit commands is a must for a developer. In addition, branching and merging are crucial abilities for developers since they enable autonomous code writing. While Mercurial uses a distributed branching strategy, SVN and TFS are centralised VCSs.

Do they have Any ReactJS Workflow Experience?

The largest difficulty facing frontend developers is state management in massive React projects. Look for people whose portfolios speak eloquently about improving application performance and who have experience working on projects where maintaining the state across the application components was clear.

Check to see if they are familiar with well-known state management tools and architectures like Redux, Mobx, and Context API. To synchronise the state of applications across all components, they are employed.

A plus for your team is someone who is knowledgeable about the most recent additions, such as hooks in React 16.8. It enables your team to manage project complexity and turn functional components into stateful ones without having to write a class. Therefore, React developers must have a basic understanding of state and state management frameworks.

Do they Possess a Thorough Understanding of React’s Fundamentals and Styling Techniques?

You require a developer experienced in experimenting with React principles and basics because React is a sizable ecosystem with reusable components. In addition, developers need to understand what the Create React App is and how it functions. It is a tool that aids in providing the first default tools needed to construct a React project. Not to mention, Babel, JSX, Next.js, etc., are some essentials that developers must master in order to excel in creating React applications.

Similarly, it is highly advantageous to hire a React developer who is both a coder and a stylist. Designing highly responsive UIs and creating rich, dynamic UIs requires an understanding of React components, external styling libraries, and CSS methods.

Some CSS approaches are frequently used by developers to style React components since all of these tactics are defined in CSS and are intended to simplify the styling procedures with React.

One last test to see if they are familiar with dealing with Material UI and SASS. Large stylesheets are kept structured using SASS as a CSS extension since Material UI is frequently used to design complicated UI components. All in all, having strong CSS and style skills is unquestionably a strength of React developers.

Does their Learning Curve have any Flexibility?

Each and every front-end developer is aware that React is based on JavaScript. As a result, the learning challenge is rather low. Understanding React principles, libraries, and their commands and syntax won’t take JS developers more than a month or two to master because of its simple learning curve and thorough documentation.

In addition, developers must get familiar with a wide range of third-party software, libraries, and frameworks, like Redux, style components, Material UI, etc. Well, don’t worry! Additionally, it doesn’t take up a lot of time. Redux, for instance, is a simple API that can be learnt in a week.

Additionally, React is the finest library for web development since it is open-source and has a large community of supporters. Because of its simplicity of use and adaptable learning curve, this technology is being adopted by several businesses. As a result, you should make sure the developers you recruit are willing to pick up new skills as necessary.