Next JS vs React: Which Framework Is Better For Front-End? 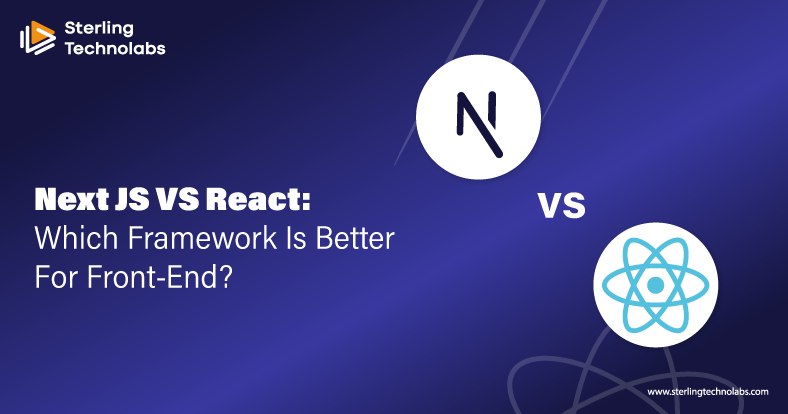 Beginning with any new project is considered a daunting task, but modern and advanced technology can construct the process of development less painful and helps the individual to concentrate on their business goals. We reviewed everything with in-depth knowledge of the differences between Next JS vs. React in detail in this blog post to make the process easier for you in choosing between the numerous technologies with the goal of helping you make the ideal decision about what should be used where and in which case.

“With the modern Next.js, server rendering React applications has never been more manageable, no case where the data is arriving from.”

Next.js supports pre-rendering and static export and has more excellent features like faster developer compilation, automatic building size optimization, and a preview mode. The recent version of Next.js is at that point where React has been missing for a lengthy period of time, having all the functionality individuals require to assemble ready-to-go apps, with the great documentation, and getting more and more widespread every day globally with front-end developers. Next.js is accomplishing really well, but that doesn’t signify that individuals should consistently utilize this framework.

React was originally a product of Facebook, and today react has evolved into one of the considerable front-end libraries and most used JavaScript frameworks. React brought the world of JS by storm and became its undisputed leader several years ago. React recommends using a functional paradigm of programming and a reactive approach while also attempting to establish industry standards.

For instance, Redux is believed to be the finest library for applications for enterprise-grade React; individuals require to think about a few points mentioned below: Redux can enormously slow the development process and productivity at the same time and can make the entire job more difficult when trying to introduce a new feature, and developers have to alter too numerous things throughout the application. So we are again encountered with the exact dilemma: should developers prefer a more straightforward library?

You must need to construct your workflow utilizing React., leading to one of the more complicated paths than just operating what other frameworks of JavaScript provide you: a bunch of ready-made tools constructed into the framework. React is regarded better or known better as a library (a tool that can be utilized in any the project, such as a hammer) and more minor as a framework (an exclusive design of architecture says what type of hammers can be used and where), the requirement for the creation of the own workflow and those workflows developed into a framework known as Next.js.

Pros and Cons to React and Next.js

We have seen React and Next.js compared side by side in detail, having basic concepts in the mind of which individual can be chosen. However, we have solely witnessed the tip of the iceberg; why not dive deeper to find out the advantage and disadvantages of every framework.

We believe that Next.js and React are fantastically effective tools that will help in building beautiful, snappy web applications by serving numerous advanced features. For example, the individual can employ Next.js if they are creating a marketing website that is SEO-driven and requires image optimization by deploying with zero configuration. On the other hand, React will provide better results for sites that need powerful cross-platform applications and UIs support. Also, if you are a learner or a beginner, making more sense to begin learning with React.

Next.js and React are easy to begin with when it comes to tooling as both go beyond the straightforward “greeting world” project; it is pretty effortless to discover help, whether in community resources or documentation. React is regarded as a magnificent addition to any type of project and can scale if provided the opportunity; considered more versatile comparatively Next.js due to its vast library. The determination to implement it totally relies on the engineer. We hope the in-depth research and comparisons provided here offer some detailed insight into both platforms.