The Average Cost of Hiring React Native Developers In 2022 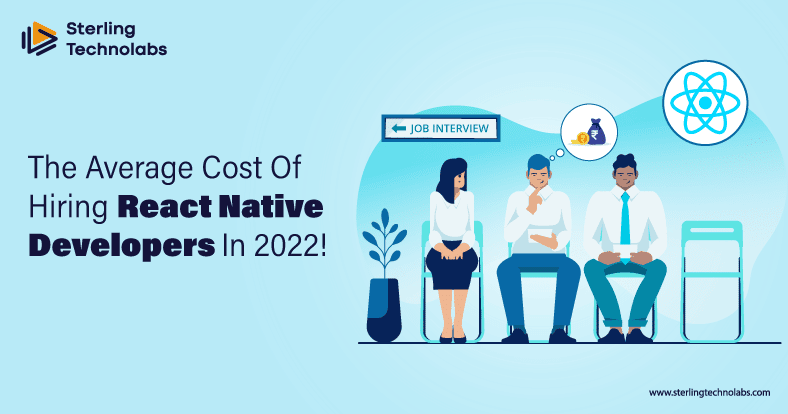 The average cost to employ remote React Native developers would be between $10,723 and $157,300, while the hourly rate would be between $5 and $93 per hour. Let’s briefly discuss the reasons React Native is popular before delving into the specifics of how these numbers were determined. Facebook developed the open-source React Native framework for building cross-platform mobile applications. One of the best cross-platform mobile app frameworks is React Native, which has gained popularity for its adaptability, dependability, and cost-effectiveness.

The fact that it has been used by the development teams of companies like Skype, UberEATS, Instagram, Tesla, and Airbnb makes it evident that you could be attracted to use it as well. To continue forward with your proposal, you must first decide whether to hire React Native engineers. You could also be curious about other things, such as how much it will cost, what factors are at play, and how to get started. This post is for you if the answer is yes.

There are several elements that will come into play when you sit down to estimate the cost of employing React Native engineers. You might concentrate on these often asked questions for a better assessment as you sift through your priorities:

Once you’ve received a succinct response to these inquiries, we’ll talk about how these elements may affect how much it will cost to hire a remote React Native developer.

One of the most important business needs that affects how much it will cost to hire dedicated React Native developers is the size of the application. According to size, there are three different sorts of applications:

As a result, if you have a rough sense of the size of your application, you may estimate the roughly equivalent number of working hours, which may help you accurately estimate the entire development cost.

Let’s now use a few of the most popular app categories as an example and gauge their difficulty based on features. You may engage a less experienced developer and have the work done for a low rate if you want to create a basic mobile application with no complex backend, no APIs, simple UI, login functionality, etc.

In contrast, if you’re creating a database- or API-based application with features like a customised user interface, payment integration capabilities, a robust back-end server, API integration, etc., you’ll need a mid-level developer with some experience, which will result in a slight price increase because it will take more time to create these functionalities.

eCommerce-based apps are another prevalent sort of application you will find today. These applications need you to design extremely complicated features with extensive customisation. You will have to do shopping cart connections and integrate SaaS-based solutions. A senior-level developer with a small team is needed for these kinds of apps. The price will thus be the highest of all the apps covered in this area.

Different kinds of talents are required for React Native app development projects at various stages. Along with talent, a developer’s experience is also important. Even though some developers may not have as much professional experience, they may have worked on several projects from diverse businesses. On the other hand, some engineers could have more relevant industry experience than others but have never had the chance to work on various software development projects.

Depending on the amount of expertise and experience you need for your project, the developer pricing will change. You can choose junior-level React Native engineers with a lower hourly cost if you need a fundamental understanding of a framework’s React Native libraries.

In contrast, if your development process calls for automated workflow-related services and native apps, you will need senior-level full-stack engineers with the necessary expertise, in-depth technical knowledge, and experience. The price will rise in line with that.

React Native developers fall into the Junior, Mid, and Senior skill and experience categories, and each kind has a particular skill set that you could encounter in interview questions.

You should also take into account the engagement model you intend to use when you’re considering recruiting React engineers. An organisation can choose from three different engagement model types in general:

For companies that provide incredible service, the dedicated engagement approach is typically the standard. You may on-demand employ remote React Native engineers thanks to our specialised engagement strategy. Simform gives you the flexibility to add and remove personnel in accordance with your project’s needs. Whether you need a project manager, backend/frontend developer, UI/UX developer, or QA, we can help.

A team of sector specialists will establish a clear plan of the entire project and its development life cycle for this reason. The lifetime is then divided into significant milestones, each of which we attempt to accomplish individually. The project owners would still have total control over the situation if these compensations were based on the different milestones, and the remote developer would have a clearly defined path to follow. Additionally, it increases the level of openness between clients and developers.

The Average Salary for a React Native Developer

We have examined the many elements that influence the cost of employing React Native Developers up to this point. Now that we’ve covered the basics, let’s investigate the typical cost based on important variables like developer experience, location, and project scope.

Because experienced developers bring a range of talents and expertise to the table, clients are willing to pay extra for their services in the software development industry. You may pick the ideal developer with the utmost simplicity if you are already aware of the level of competence needed for your app. There are three different sorts of React Native developers: junior, mid, and senior-level developers, depending on their degree of experience and competence.

Junior: These React Native engineers are familiar with the fundamentals of libraries, components, and APIs. You anticipate them to create simple functionality with ease and to be unfamiliar with testing and debugging. However, because they lack a considerable quantity of expertise and experience, these developers are unable to handle any difficult cases. Such developers typically earn between $69,000 and $101,985 per year in pay.

Mid-Level: These developers have a lot of experience because they’ve been in the business for a while. You can choose any middle-level developer if you’re building an app with an emphasis on database storage and performance optimization. You may also anticipate them to create mobile-specific features, address problems with data saving and caching, and incorporate third-party services. A mid-level developer’s annual compensation would fall between $117,277 and $122,136 on average.

Senior: In the world of React Native programming, these guys are supermen. Senior developers are entirely trustworthy and may serve as role models for junior and mid-level engineers. Let’s say you want to build a CI/CD pipeline, native development, or use native libraries and frameworks to build an enterprise-level solution. Senior-level developers are your best choice in that situation. Their typical pay is in the $127,861 to $157,300 range.

We really hope that our advice has assisted you in accurately calculating the cost of hiring React Native app developers or in helping you to narrow down your possibilities. We comprehend how difficult it might be to find a top-tier React Native developer. This is particularly true if you are the only person responsible for finding, interviewing, and onboarding new employees while also overseeing all other business operations.

Therefore, hiring devoted developers from companies like Simform is always a smart move. The best thing is that you can always add or remove resources as needed, depending on the demands of your project. Simform handles all of your sourcing, interviewing, onboarding, payroll, healthcare, etc. while you concentrate on your company. Connect with us right away to learn more, and let’s talk about what we can do for you!