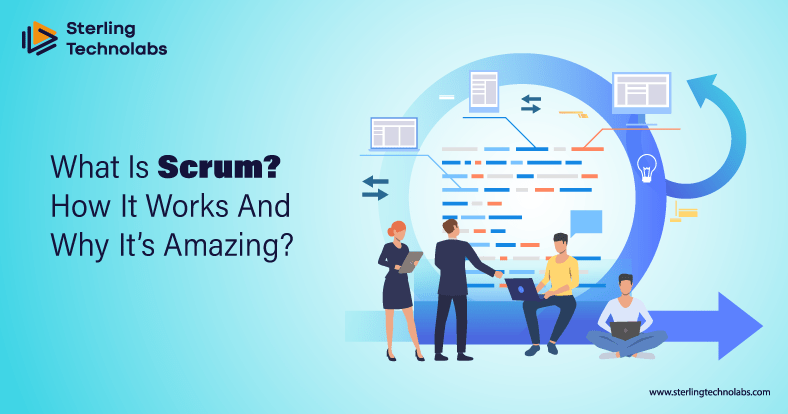 What is the Scrum Methodology?

Scrum is a management framework that uses cross-functional teams to achieve their objectives and adapt to change. These teams apply Scrum’s incremental techniques within a larger framework to accomplish their goals. Instead of focusing on all of the specific operations that occur during each sprint and iteration, Scrum’s primary objective is to rapidly establish the possible minor components of a release. Instead of focusing on the various phases, this is done.

Implementing Scrum as a way of project management reduces development costs, generates immediate returns, improves client responsiveness, and boosts job satisfaction. Scrum is more akin to a fluid practice than a linear process since it considers many moving teams, components, and objectives as it progresses.

Scrum also provides a focused structure through the use of four separate ceremonies, which are as follows:

As a result, the procedure might be defined as very efficient and prescriptive. We will later have a more in-depth discussion on these Scrum ceremonies.

Any organization that implements the Scrum methodology enjoys two substantial benefits. The first benefit is that the overall quality of projects produced by Scrum-using teams is much higher. The second most important advantage of utilizing Scrum is that it ensures Scrum teams operate as efficiently as feasible. This is the second most important advantage of using Scrum.

Scrum can efficiently use time and money resources because teams plan and develop a budget before commencing each project. This aids in eliminating any unexpected fees and time lapses that may occur. After each sprint, Scrum teams will test their product before releasing it to the public. This helps the teams to identify and address any issues that may have developed with the product throughout the sprint.

When establishing a new project, numerous elements and components must be considered to ensure its success. Scrum methods ease the process of keeping track of these components by dividing large projects into smaller, more manageable chunks and providing teams with a significantly more realistic strategy for completing those tasks.

Enhanced project visibility and transparency: The Scrum methodology eliminates all misconceptions and issues through routine check-ins, daily meetings, and other well-defined roles that provide the entire team with insights into the project. This increases the visibility and transparency of the project. As a result, teams utilizing Scrum can keep their processes flowing and their time under control, as all problems are found far ahead when they could create delays.

Projects may change throughout their duration, which increases the likelihood that their prerequisites will also change. A scrum is an approach that readily accommodates change. Because Scrum teams function in sprints, any necessary adjustments may be readily applied in the subsequent sprint. They do not need to restart the process from the beginning, as is commonly the case with Waterfall-based teams.

Daily Scrum meetings are a crucial aspect of the Scrum methodology, and each member of the Scrum team is responsible for facilitating them. As a result, the entire team is better equipped to monitor the progress of each iteration and identify potential obstacles sooner in the project. This also shows each team member’s duties each day, providing additional validation for their efforts.

The Following are Some Disadvantages of Using Scrum

Frequently, the adoption of Scrum occurs without any scheduled time or cost restrictions, which may have an extra impact on scope.

Occasionally, teams do not test each iteration as entirely as they should, which can significantly impact the final product’s quality. For the Scrum process to be effective, the participating teams must be fully committed to the project they are working on and each Scrum process phase.

Scope creep can become a severe problem due to the pliable nature of Scrum’s objectives and the open and encouraging advocacy of change. A typical practice among stakeholders is to work toward the introduction of more frequent and reasonable adjustments to the goals and process by providing additional capability.

There are disadvantages to implementing the Scrum technique, although all of the characteristics above make the Scrum method seem like the best solution for any project-related issues. Scrum initiatives lack a defined schedule and instead organize their work around sprints. As a result, it is feasible for projects to take far longer than anticipated. Due to the Scrum methodology’s emphasis on continuous improvement, there is no explicit final iteration.

The project team must execute a series of scrum events to apply the scrum framework to the project delivery successfully. The following are the phases of a scrum:

The Planning of Endeavors

During the project’s planning phase, you will develop a strategy for how the project will achieve its objectives and an overall plan for what it will accomplish. Scrum, on the other hand, seeks to identify only the vision, goals, or final result, in contrast to the traditional way of project management, which aims to have a project that is thoroughly planned and only needs to be executed according to the plan. During sprints, the particulars are worked out, and problems encountered during one sprint are prioritized and transferred to the backlog for the subsequent sprint. This is the essence of what it means to be agile: the capacity to adjust quickly to changing conditions utilizing the technique’s iterative methods. During the project planning meeting, the product vision statement and product backlog are developed (described in the next section).

Preparing for the Launch Of

The release planning procedure determines which features will be delivered to the product’s owner and when. Given that the product is given to the owner in stages, this is necessary. Each sprint does not necessarily need to deliver a product feature that can be sold (Some aspects will be too huge, and to make them manageable, sprints should be limited to a maximum of four weeks). Still, it should produce a product increment that can be seen.

The sprint is the cornerstone of the agile methodology. After a single iteration, represented by a sprint, the project enters the planning phase for the next iteration. The ideal duration for sprints is between one and four weeks. This will ensure ample time to complete significant product development without making sprints too lengthy to be manageable. There is a sprint planning meeting at the start of each sprint. During this meeting, items are moved from the product backlog to the sprint backlog. The development team will then hold daily scrum meetings during the sprint to ensure that they stay on track and communicate effectively to reach the best level of productivity feasible. During the sprint review meeting at the end of the iteration cycle, the development team will finally present the product owner with a fully functional version. In conclusion, during the sprint retrospective meeting, the development team will analyze their existing processes to see how they might be improved for the upcoming sprint.

In addition to scheduled activities, planning team meetings describe how the project will be completed and which product components will be given.

The daily scrum meeting is the most crucial component of the scrum framework. This meeting is also known as a stand-up meeting since many teams prefer to hold it was standing rather than seated so that it is more efficient and gets to the point faster. Each one of the team responds to the following three questions presented by the other participants at the daily scrum meeting:

Two meetings occur following the conclusion of the sprint. The goal of the first meeting is to offer the product owner feedback on the outcomes of the most recent sprint. The scrum team as a whole is present at this meeting. The product owner must present a tangible progress report during the sprint review meeting. This report need not cover each sprint’s required to complete an entire product feature.

The team’s final meeting during the sprint is referred to as the Retrospective, often known as Retro. The team analyses what went well and what could have been done better at this discussion. In addition, it examines how the team may enhance its performance during the upcoming sprint. The ScrumMaster and the remaining team members attend the retrospective meeting.

How Does Scrum Work?

Scrum is a process framework that emphasizes the utilization of small teams to create products that undergo continuous improvement. Scrum is an agile process that employs incremental, lightweight, and integrated software development. Kanban and XP are different agile strategies.

It is not a technique but a mindset and way of doing things. Scrum describes, in other words, a set of working relationships that facilitate the management of complex projects through a joint effort. Below is a breakdown of the roles, artifacts, and rituals that comprise these Scrum interactions.

Scrum emphasizes self-organization as an alternative to hierarchy among its participants. It transfers accountability for the completion of the work to the individual teams. The interactions within a Scrum team must therefore be established on the three pillars of transparency, inspection, and adaptation.

Every person liable for the project’s outcomes must have a crystal-clear awareness of all of the project’s critical and relevant aspects. A good Scrum team ensures that its members are constantly sharing knowledge.

At each Scrum event, there is an opportunity to assess the present condition of the project and its procedures for potential problems and improvement opportunities.

All essential modifications have been implemented.

This will likely appear clinical, but sessions can become emotional when discussing progress. It is simple for disputes and emotions to impair one’s ability to analyze and adapt to novel situations. Strong teams utilize the five Scrum values—commitment, boldness, concentration, and openness—to build the strong relationships required for effective communication. These principles are respect, transparency, and receptivity to input.

When Should You Use Scrum?

Scrum is a valuable method for managing projects that must be adaptable and straightforward while also being sufficiently well-defined to ensure that stakeholders and customers are satisfied with the results.

As discussed in the previous section, Scrum is defined by its sprints; consequently, it is best suited for projects that would benefit most from constantly reevaluating the team’s tasks, objectives, and roles.

Scrum has its own set of predefined duties that offer a structure for the project. Despite this, there is adequate space within the framework to handle assignment changes based on timescales that continue to emerge from the process.

Scrum can Also be Applied to the Following Types of Projects

It demands a quick feedback loop.

Have stakeholders who are frequently susceptible to having their opinions influenced.

Have a team that collaborates across functions.

Avoid becoming distracted by an excessive number of interruptions to daily operations.

Utilizes the feedback collected from stakeholders to determine the sprint’s priorities.

In a nutshell, Scrum is all about ensuring that your team collaborates productively and sustainably on a substantial project. You may experience occasional frustration due to the challenging work, but in the long term, it will result in guaranteed production. From this perspective, the trade-off is worthwhile. Scrum is a fascinating and engaging methodology. If you don’t believe me, ask any company successfully implementing Scrum; they will all characterize it as thrilling, exhilarating, proud, and joyful.

Previous Posts: A Guide How Blockchain Is Revolutionizing Crowdfunding Apps Development
How To Create A Music Streaming Application Like Spotify?

Everything You Need To Know About Custom Web Development