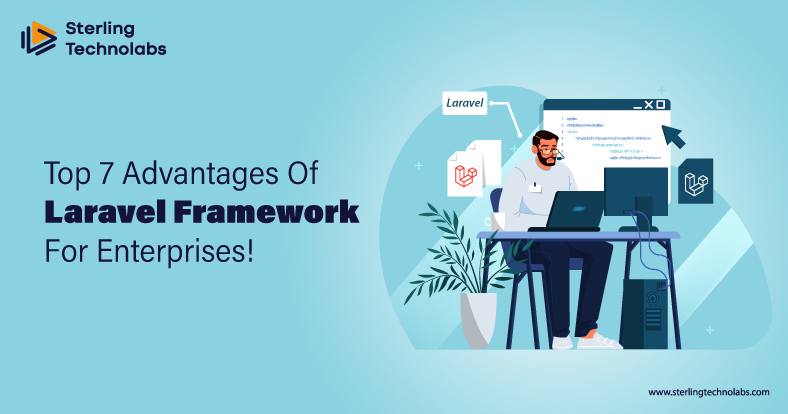 “What is Laravel?” is a simple question with a straightforward response. It is easy to understand: Laravel is a PHP framework for developing cross-platform web applications.

However, fully comprehending Laravel’s advantages and applications necessitates a deeper look. A developer can use Laravel to access an extensive library of pre-programmed functionality (such as authentication, routing, and HTML templating). This toolkit makes it easier to quickly create sophisticated web apps while reducing the amount of coding required.

Laravel applications are highly scalable and feature codebases that are simple to maintain. Developers can easily add functionality to their apps thanks to Laravel’s flexible packaging system and powerful dependency management and developers.

What Is a PHP Framework and How Does It Work?

PHP (PHP Hypertext Preprocessor) is an open-source server-side scripting language commonly used in web development. PHP was used on roughly 80% of all websites in early 2021. While many people are unfamiliar with PHP, almost everyone is familiar with WordPress, one of the most well-known PHP programs.

Object-oriented frameworks are common in modern PHP frameworks. As a result, having a rudimentary understanding of concepts like classes, objects, and inheritance is beneficial before going into a framework.

PHP frameworks use Model-View-Controller (MVC) architecture. The Model represents the data for the application and its associated logic for those unfamiliar with MVC architecture. A Model can be a table of subscribers, for example. The View serves as a point of interface with the user, allowing them to view and modify data from the Model. The Controller serves as a link between the Model and the View. Another way, the Controller takes user requests, retrieves the necessary data from the Model, processes it, and provides it to the view.

Penetration tests are more challenging to carry out by qualified cybersecurity professionals who seek to get into your system without prior knowledge of its development to find unpatched security vulnerabilities.

Here are the Top 7 Advantages of Laravel Framework For Enterprises:

The following question is, “Why Laravel?” once you’ve answered, “What is Laravel?” Laravel comes with a wide range of powerful tools that make web app development easier and faster, and the resulting codebases are well-structured and easy to maintain.

The following are the top seven advantages of the Larvel framework for businesses:

Data security should be your top priority if you run a large corporation that collects information from clients or consumers. And if you’re thinking about investing in it, you should choose a framework you’re familiar with. Most essential, you must ensure that it is beneficial to you.

The Laravel framework guards against a wide range of cyber threats. It also protects against cross-website forgeries and SQL injections. All of these are included in the laravel development services to safeguard your coding foundation. This is done to ensure that your web apps run smoothly without any security issues. Laravel assists businesses in avoiding the risks associated with development projects.

Another compelling reason to use Laravel is its ability to deliver exceptional performance for online apps. Laravel provides several features to help developers improve the performance of their online applications. While used in conjunction with the Laravel framework when designing web apps, tools like Memcached and Redis make it easier for developers to improve web app speed. Using Laravel reduces the time it takes to construct an app, and it’s also helpful in adding new features to any app.

Laravel was built from the ground up to make operations like routing, authentication, migration, caching, and more simple across a wide range of web development projects. Using straightforward and expressive command-line interfaces and Composer, Laravel makes it simple to integrate pre-made modules into an application.

Because Laravel is an open-source platform, businesses favor it over other options. Laravel has a strong community of dedicated developers who constantly work to improve its flexibility and scalability.

As a result, if you or your developers are working with the Laravel framework and want to integrate some complex functionality, you can always seek help and expert advice from the community and build the project to your specifications. In conclusion, despite any such complicated functionalities, your app development does not come to a halt, and you obtain precisely what you want.

Hosting a web application is expensive since the host will have more requests to execute at any given time as your site’s traffic grows. In addition, if traffic exceeds a host’s capacity, the site may crash. This could lead to the loss of a large amount of data. Given that we’re talking about business, the data is valuable and massive in terms of volume. Losing that type of data can significantly negatively impact a company’s bottom line, potentially resulting in customer loss. As a result, if a company’s website crashes, it will be a complete loss. However, if the company hires a Laravel developer, the problem will be solved.

As a result, it is advised that you take the essential procedures before the project development stage. Because it offers an automated message queue system, choose the Laravel framework as your major web application development technology. This system is programmed to operate as a load balancer along with other applications. It also ensures that your queue is free, the web server is healthy, speed is increased, and data morality is preserved.

Web Application Development with a Superior Set of Features

It is vital to compile a list of needs before developing an application or website. It will assist in the search for a technology framework that is most appropriate for the needs and checks the most boxes. Allow me to save you time by stating that Laravel can be used in any category. Why? Because it includes a large number of capabilities that allow web app developers to design any app that matches their needs.

This framework makes it simple for businesses to create apps. Even if the routing methods are straightforward, you can quickly inspect the composers and run unit tests. Because of its enormous adaptability, the Laravel framework can assist in developing small or large apps specifically designed for businesses. Authentication and caching are among the capabilities given by laravel, ideal for both small and large-scale applications. It’s also worth noting that the Laravel framework features a unique auto-pagination function that aids application development in the face of any issues.

The Most Effective Authentication and Verification Method

One of the most challenging functions for web developers to build is the authentication and verification procedure for web applications. However, if you’re employing Laravel development services for your enterprise project, you won’t have to be concerned. Laravel developers may quickly design a valid logic for granting access to authorized users using this framework.

By checking them against all of the enterprise’s benchmarks, Laravel can help you reduce the risk of having any fake clients on your list. Laravel’s streamlined verification process allows businesses to take simple steps to organize their reasoning. It also offers better setup options. You can also gain control by gaining access to a variety of resources. This will eventually remove all of the phoney clients from your client list. As a result, Laravel development firms establish new benchmarks for total stability.

We have entered a new year, and it has begun with renewed vigor, enthusiasm, and new difficulties for businesses. Some would want to stay on top and maintain their number one position, while others simply try to stay afloat. With the numerous benefits of the Laravel framework, it is clear that Laravel will be one of the most popular frameworks in 2022.