SRE vs. DevOps — What’s The Difference Between Them? 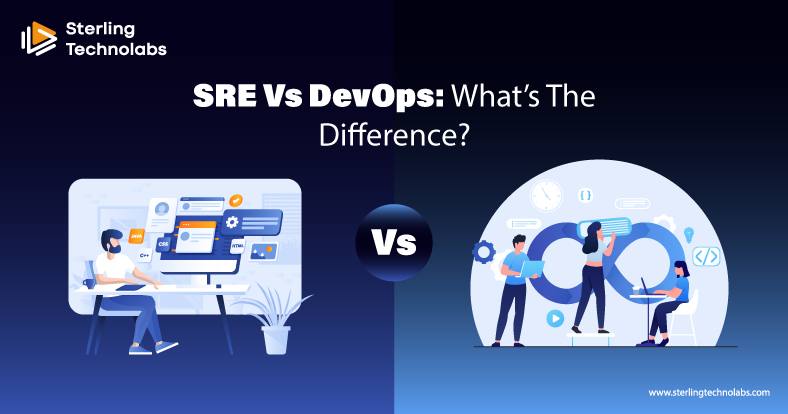 Site reliability engineering (SRE) is an IT operations software engineering methodology. SRE teams utilize the software for system management, problem resolution, and the automation of operations tasks. SRE transfers the tasks traditionally performed manually by operations teams to engineers or ops teams who utilize software and automation to solve problems and manage production systems. SRE is a valuable technique for developing highly scalable and reliable software systems. It facilitates the management of large systems via code, which is more scalable and sustainable for sysadmins managing tens of thousands or hundreds of thousands of machines.

SRE assists teams in striking a balance between releasing new features and ensuring their reliability for users. Standardization and automation are two essential elements of the SRE model. Engineers tasked with providing a site’s dependability should always seek to improve and automate operations tasks. In this manner, SRE helps to enhance the reliability of a system both now and as it expands over time. SRE assists teams in transitioning from traditional IT operations to cloud-native operations.

What is the Role of Site Reliability Engineering?

A site reliability engineer is a unique position that requires a background as a software developer with operations experience or as a sysadmin or IT operations professional with software development skills. SRE teams are accountable for the deployment, configuration, and monitoring of code, as well as the availability, latency, change management, emergency response, and capacity management of production services.

Using service-level agreements (SLAs) to define the required system reliability via service-level indicators (SLIs) and service-level objectives (SLOs), site reliability engineering assists teams in determining which new features can be launched and when (SLO). An SLI is a defined measurement of particular aspects of the service levels provided. Request latency, availability, error rate, and system throughput are significant SLIs. The target value or range determines the SLO for a particular service level based on the SLI.

An SLO is then determined based on the acceptable downtime for the required system reliability. This level of rest is known as the error budget, the maximum threshold for errors and outages.

The Most Important Advantages of Investing in Site Reliability Engineering Include:

Clarity is one of the most significant benefits provided by site reliability engineers. They utilize relevant metrics regarding bugs, efficiency, productivity, and the general health of the service, among others. In addition, they can translate these measurements in terms of their impact on more tangible factors, such as the average length of downtime and its relationship to lost revenue. With this level of objectivity, a site reliability engineer can identify improvement opportunities at multiple development and operations pipeline stages, whether to maximize efficiency, remove vulnerabilities, or any other reason. This information may also be pertinent to departments like Marketing, Sales, and Support. To improve communication and cooperation, SRE specialists will also monitor the interrelationships between teams, departments, and services.

Moreover, these engineers can demonstrate the measurable benefits of their practices. Depending on the audience’s background and priorities, this can be achieved via technical staff or stakeholder-focused language.

A more efficient system for locating and resolving errors can liberate a significant amount of time for development staff, allowing them to focus on creating new features and enhancements. In addition, operations teams will have more room for configuration, testing, and maintenance. In other words, site reliability engineers can reduce the interruptions experienced by IT professionals engaged in creating value and driving productivity.

Site reliability engineers can revolutionize operations departments with a global perspective and a solid understanding of modern tools and best practices. While an SRE specialists can identify issues with relative ease, they are not always responsible for their resolution. Instead, they will work to understand the systems they are working with and, utilizing a combination of automation and machine learning, create a system in which specific alerts are automatically sent to the individual best suited to resolve them.

DevOps is best described as the collaborative conception, development, and rapid delivery of secure software. DevOps practices enable software developers and operations teams to accelerate delivery through automation, collaboration, immediate feedback, and iterative improvement. A DevOps delivery process expands on the Agile software development methodology’s cross-functional approach to building and shipping applications more rapidly and iteratively. By adopting a DevOps development process, you are choosing to improve your application’s flow and value delivery by fostering a more collaborative environment throughout the entire development lifecycle. DevOps represents a shift in IT culture’s mentality. Incorporating Agile, lean practices, and systems theory, DevOps focuses on incremental software development and delivery. The ability to create a culture of accountability, enhanced collaboration, empathy, and shared responsibility for business outcomes is essential for success.

The Four DevOps Phases Are

As DevOps has evolved, its complexity has also increased. This complexity is the result of two elements:

Each team selected its tools in the Bring Your DevOps phase. This approach caused difficulties when teams attempted to collaborate because they were unfamiliar with one another’s tools.

The second phase of DevOps, Best-in-class DevOps, was adopted by businesses to address the difficulties associated with using disparate tools. Organizations adopt a standardized set of tools in this phase, with one preferred tool for each step of the DevOps lifecycle. It made it easier for teams to collaborate, but the problem was moving software changes through each stage’s means.

To address this issue, organizations adopted DIY DevOps, building on top of and between their existing tools. Integration of their DevOps point solutions required a great deal of custom development. However, because these tools were developed independently without integration, they have never fit perfectly. For many organizations, maintaining DIY DevOps required significant effort and increased costs, as engineers focused on tooling integration instead of their core software product.

An approach based on a single-application platform enhances team experience and business productivity. GitLab, The DevOps Platform, supplants Do-It-Yourself DevOps by providing visibility and control across all stages of the DevOps lifecycle.

GitLab facilitates the realization of the full potential of DevOps by enabling all teams – Software, Operations, IT, Security, and Business – to collaboratively plan, build, secure, and deploy software across an end-to-end unified system. The DevOps Platform is a single, self-managed or SaaS-deployment-agnostic application with a unified user interface. It is based on a single codebase and a unified data store, allowing businesses to eliminate the inefficiencies and vulnerabilities of a DIY toolchain. Every organization will require a DevOps platform to modernize software development and delivery as software-driven organizations become more distributed and agile in the future. By making it easier and more reliable to adopt the next generation of cloud-native technologies – from microservices to serverless and eventually edge architecture – all businesses will be able to ship software faster, with maximum efficiency, and with security embedded throughout their end-to-end software supply chain.

Here are Some Most Prominent Advantages of DevOps:

The business value of DevOps and the advantages of a DevOps culture lie in the capacity to enhance the production environment to expedite software delivery through continuous improvement. You must be able to anticipate and respond immediately to industry disruptors. This is made possible by an Agile software development process that empowers teams to be autonomous and deliver faster, thereby reducing the amount of work in progress. Once this occurs, crews can respond to market demands at market speed.

For DevOps to function as intended, it is necessary to implement several fundamental concepts, including the need to:

The purpose of DevOps is to write and deploy code. SRE, on the other hand, is more comprehensive, with the team working on the system from a broader ‘end-user’ perspective.

A DevOps team uses an agile methodology to develop a product or application. They create, test, deploy, and monitor applications with speed and precision. An SRE team regularly provides feedback to the developers’ team. Their objective is to leverage operations data and software engineering to expedite software delivery primarily by automating IT operations tasks. The mission of a DevOps team is to make the entire organization more efficient and automated.

The objective of SRE is to streamline IT operations by employing methodologies previously employed only by software developers. Site Reliability Engineering is focused on keeping the app or platform available to customers (with a strong emphasis on customer needs by prioritizing SLA, SLI, and SLO metrics). In contrast, DevOps focuses on the overall processes that should result in the successful deployment of a product. Following are additional distinctions between DevOps and Site Reliability Engineering.

DevOps teams work primarily with code. They write it, test it, and release it into production to create software that will solve a problem for someone. They also configure and administer a CI/CD pipeline. The approach of Site Reliability Engineering is somewhat expensive. The team analyzes to determine why something went wrong. They will do whatever it takes to prevent the issue from persisting or recurring.

DevOps and SRE should collaborate toward the same objective. SRE and DevOps are frequently viewed as two sides of the same coin, with SRE tools and techniques complementing DevOps philosophies and practices. SRE is the application of software engineering principles to automate and improve ITOps functions, such as Disaster Response, Capacity Planning, and Monitoring. On the other hand, a DevOps model expedites the delivery of software products through collaboration between development and operations teams.

Fifty percent of organizations that have utilized DevOps have adopted SRE for improved reliability over the years. SRE principles enable improved observability and control of dynamic, automation-dependent applications. The ultimate objective of both methodologies is to improve the end-to-end cycle of an IT ecosystem, specifically the application lifecycle through DevOps and operations lifecycle management via SRE.