How to Develop a Music Application? Revenue, Features, & Business Model 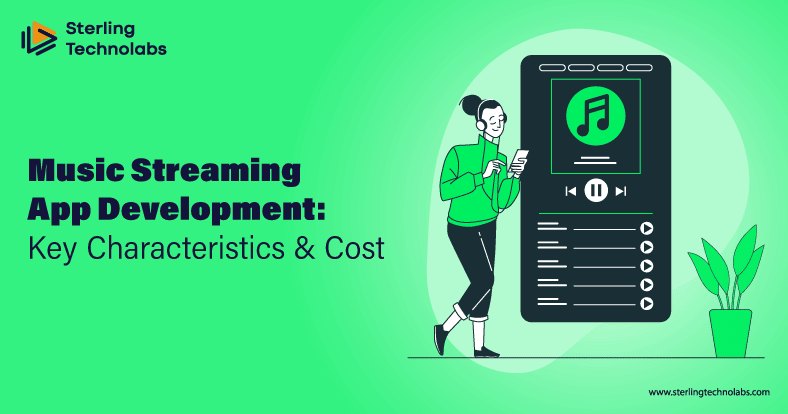 Thinking about creating a music app similar to Spotify or Pandora? This post will walk you through each step of making a music app, from business to technical considerations. The cost of creating a music app is another topic covered in depth on the site. In the past couple of years, the internet has radically altered every business, as well as how we listen to music. Music streaming applications are more common than ever before as we increasingly rely on mobile applications for almost everything.

By 2025, Statista projects that there will be 913.2 million subscribers to the music streaming market. Additionally, until 2025, the segment’s revenue is expected to expand at a compound annual growth rate (CAGR) of 10.08 percent. So, if you have a creative idea for a music application, it can be a great business to pursue in the current music streaming market. This blog provides detailed instructions for building a music app, including technical details and examples. A basic music app with the necessary functionality can be created for between $38,000 and $53,500. There are, however, a number of factors involved, which we’ll go over in the piece that follows.

You have a great concept for an app, but where do you begin? You must create a planned concept for the project before moving forward with the development of a music app. It entails gaining a grasp of the music app market, investigating your target market, and deciding what kind of future app you will create. Determining the target platforms or devices you wish to launch your app on will also benefit from an analysis of the target audience.

In the discovery phase, you also carry out a competitive analysis to fully comprehend your market’s rivals before defining your distinct value proposition. For instance, there is fierce competition in the worldwide music app market thanks to major competitors like Spotify, Pandora, Apple Music, and others. Finding your specialty and creating an app that outperforms the competition is therefore essential. Let’s delve more deeply into the music streaming app discovery process.

Choose The Type Of Music Applications

The first stage in developing your app idea is deciding what kind of music app you want to make. There are numerous formats and listening options for music streaming apps. However, the three most frequent types of music streaming services are as follows:

Most likely, you’ve already decided what kind of music app you want to develop. Did you know, though, that if your app plays music without the label’s or the artist’s consent, it will be fined between $700 and $150,000 for each song played? In order to prevent legal obstacles, let’s go through in detail the licenses and approvals you will need as the proprietor of a music application.

You can obtain a license from BMI or ASCAP to comply with copyright laws in the USA. A nonprofit organization called the American Society of Composers, Authors, and Publishers (ASCAP) oversees the creative output of independent artists who are not affiliated with major companies like Sony Music and others. Additionally, BMI, also known as Broadcast Music Inc., is a performing rights company that serves as a bridge between both the music industry and the musicians. People can get a license from SESAC in Europe (European Stage Authors and Composers). Always research the copyright enforcement agencies in the market of the nation you individual are entering.

Phase 2: Plan Out the App Features

The analysis and research accomplished above help you list the application’s advanced functionalities and key features tailored to correspond to the requirements of the target audience. It will allow individuals to draw out a marketing, rough budget, and monetization strategies for the application.

You can charge users of your music app or charge musicians to upload and promote their music in order to make money. For instance, Spotify offers premium services with expensive subscription plans yet offers users free access to the music. For a fee, it also supports artists in managing and creating their ad campaigns on the app. You want to develop a competitive product that appeals to the audience, not just another music app. You must provide users with features that draw them in and keep them around. The success of your music app depends on how you plan and implement the app’s functionality.

Here are some cutting-edge features you may include to elevate your music streaming service:

It is time to design and construct your music streaming software now that you are clear on what you want it to accomplish. It accounts for 60% of the entire process of developing an app. Therefore, you need to work with a seasoned app development team that has a track record of producing quality apps. The estimated tech stack of a music app, its general architecture, case studies of several well-known music applications, and other crucial elements you should take into account when creating a music app are all covered below.

Your app’s development process is not complete until it has undergone extensive testing and quality assurance. Therefore, it is essential to check that your streaming software functions well and according to plan before launching. Testing is done naturally during the development process, but it is also crucial to do so once the entire software has been created. Your app is prepared for market release once the QA engineers’ found bugs or issues have been resolved. Now that you know how to establish online music streaming app, have you considered how much it will cost to do so?

Despite the fact that on-demand music streaming is a popular trend, you still have the chance to profit from the music streaming market with a million-dollar concept. However, your idea must be flawlessly translated into an app in order to win over a sizable audience and outperform your rivals.