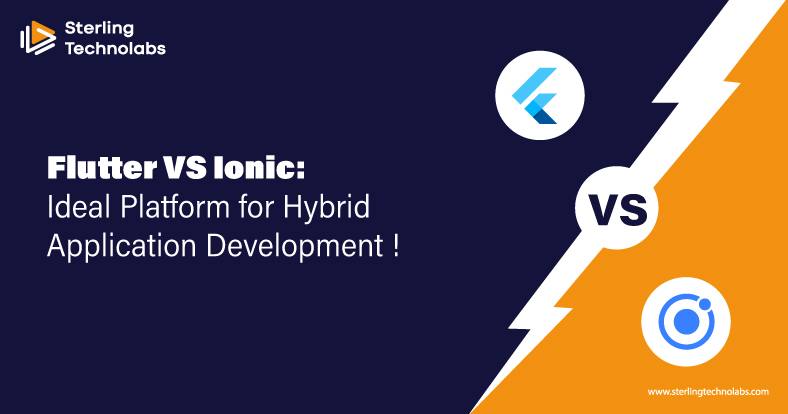 If the individual wishes to lead their genre of business in the tech realm today period, they must hold a significant base of the user. To have an extensive user base, they require a cross-platform application that functions seamlessly on both Android and iOS. Flutter and Ionic are the two greatest frameworks, utilized in the tech realm of modern-day to create high-performing cross-platform applications.

In case you think there must be a lot of similarities while working between the operating process of the leading cross-platform application development frameworks, then you are highly mistaken for sure. Even despite holding the standard goal of designing and developing high-performing applications, frameworks of both, Flutter Vs Ionic are inherently different from each other.

Since the year 2018, when Flutter got released with its 1.0 version, all users were eager to learn more about how it works compared with Ionic and which platform would be considered ideal for the developers or architects. We have looked at both the outlines and the Software Development Kits to support the firm’s decision as to the best. Here we go!

Flutter is a versatile open-source framework that can be functioned with a language named Dart, which was formed by Google and is commonly addressed as an improved UI toolkit utilized to create cross-platform apps with a codebase. It supplies accessibility for the development of flexible and expressive UI with native performance. Also, it is contributed and supported by a Google developers team and the whole community of flutter.

Ionic is a popular open-source UI toolkit that focuses on enabling an individual to form hybrid cross-platform mobile apps. It utilizes Webview for mobile devices rather than utilizing elements of the native device. The advanced framework leverages standard JavaScript codebases like Angular, vanilla JavaScript, Vue or React. Furthermore, Ionic has numerous components that supply native functionality. The framework is comprehended with minimum DOM manipulation for equipping efficient performance.

Both Ionic and Flutter transfer some common objectives irrespective of holding differences. Some of them are:

Flutter Vs. Ionic both are the leading and popular Software Development Kits that share some standard components as their ultimate objective for developing high-performing mobile applications.

Despite holding the features, both Flutter and Ionic have dissimilarities in the process of application development. Comprehending these distinctions will assist an individual in making the correct choice for the project of mobile app development.

Pros and Cons of Flutter

Pros and Cons of Ionic

We expect the flutter ionic article, which allows individuals to clear up the differences and similarities between them. Glancing into the end outcome an individual wants to achieve will enable them to make the decision process a lot easier. In addition to the requirements of the project, other factors, such as time, budget, etc., should be evaluated.