Flutter Application Development: The Ideal Fit For Your Project In 2022 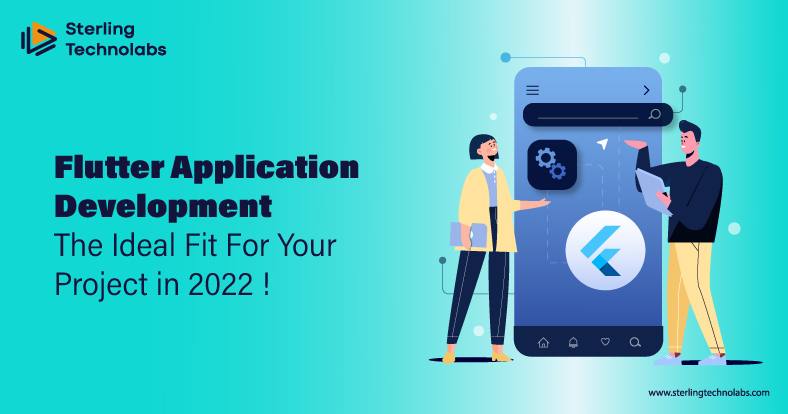 Flutter has grown in popularity and has established itself as the go-to framework for creating cross-platform mobile apps. It can be used to create intuitive and feature-rich apps for a variety of operating systems while maintaining native performance and visual consistency. Flutter includes a hot reload feature, which updates UI content automatically when the code adjusts or makes any changes in code, allowing for more fluid coding. Flutter is the 2nd most common cross-platform mobile framework used by developers globally, according to Statista. According to a Google report, over 100,000 apps have been released since the framework was introduced.

These figures show that the development of the Flutter app is becoming increasingly popular among all types of businesses, including small and large. But what precisely is Flutter, and why do firms prefer it to other cross-platform frameworks? This is exactly what we’ll go over in this Flutter guide, along with other topics like the cost of Flutter app development and its key business benefits. So, let’s get started!

Flutter is a popular cross-platform app development framework backed by Google. You can create apps and then publish them on various popular platforms (iOS/Android) using the same codebase. This simplifies the process for developers and business owners alike. The enormous speed with which Flutter accelerates the development process makes it more convenient and cost-effective. It takes a lot less effort and time to create applications with Flutter. Over half of all developers in the world like Flutter because it makes developing apps simpler and enables products to reach their full potential quickly. We’ll talk about why Flutter app development is the best option for your next project in 2022.

Why is Flutter App Development Perfect In 2022?

What exactly is Flutter app development, and how can it help you achieve your business objectives? In this section, we’ll look at the benefits of Flutter and try to figure out why so many businesses choose to use this technology for cross-platform app development.

Top Flutter app developers create high-quality apps for a low price. Excessive spending on professional, high-quality apps is no longer necessary. The app will be delivered to you regardless of your budget. There are no surprises or hidden costs. Their fantastic deal is not to be missed. They are privileged to have you as a client and will motivate you throughout the development process.

Flutter’s widget library focuses on making the code reuse easier and more efficient. What if existing Flutter codes require bug fixes or changes? Flutter’s hot refresh option is simple to use and adjust. Top Flutter app developers can get your apps to market in half the time, and with half the money and resources it would take any other developer.

The ability to create natively compiled applications for mobile, web, and desktop from a single codebase is the most obvious reason to consider Flutter. Flutter is used in mobile app development to create applications that work on both Android and iOS. This saves time and alleviates the stress that comes with developing two apps at the same time.

Flutter-based user interfaces are easy to install on any platform. It has its own rendering engine, allowing developers to keep the UI while moving to another platform. Users of the app will have a consistent experience across all platforms. Providing a positive user experience can help small businesses grow.

One codebase is preferable to two. Shortening the development cycle, involving fewer people, and lowering the level of complexity will all help you save money. This allows you to release two apps for iOS or Android much faster and on a lower budget. So, with Flutter app development, you save more money and can spend it on other important features.

Companies looking to launch in international markets will be pleased to learn that Flutter for enterprise apps supports localization in over 20 languages. The SDK also makes internationalization easier by including built-in units, currencies, dates, and other functions that make it simple to localize your app’s software.

Flutter app development offers a variety of widgets that can be used for a variety of businesses. These widgets allow developers to create complex interfaces easily. Third-party widgets, plugins, and widgets can all be used to make the development process more seamless. The UI toolkit makes it easier to create Flutter apps. SMBs can also use Flutter apps for a growing business to strengthen their presence and reach.

Flutter enables you to create stunning apps with a strong emphasis on user experience. Google created it with a layered design. This increased the interface’s flexibility and expressiveness. This layered architecture also enables faster UI rendering. As a result, designs become more personalized and eye-catching.

What happens when old iOS or Android versions are used to install Flutter apps? It operates in the same manner, with no additional effort or cost. Just make sure to go over all of the details before hiring the best Flutter app developers for your 2022 project.

It is obvious that developers are constantly concerned with security. This includes everything from deployment to testing and beyond, even after our products have been developed. Flutter automatically detects potential vulnerabilities and alerts you if they exist before they cause harm. As a result, you can relax about your Flutter app security and get the best-encrypted app. Simply hire the best Flutter app developers and delegate the rest of the work to them. You will not be disappointed.

Other platform app development is notorious for taking an inordinate amount of time. While it’s as difficult as developing two apps at the same time, you only get one in the end. The code-reusability feature of Flutter allows developers to write a single codebase and then use it across all platforms. This allows you to launch your application much faster and cuts development time in half.

You should always look at how long a company has been in the company as well as its previous successes and failures. Some businesses will have teams that are heavier on senior or junior developers, and both have advantages and disadvantages. Because Flutter is such a new framework, the knowledge gap between the two is smaller, but experience shows in different ways.

It is almost always preferable to work with an experienced team rather than a newcomer who may not know what they are doing. You may save money in the short term by hiring a junior-level developer, but you will most likely lose money in the long run. The good news is that if you really need to make it work on a tight budget, Flutter is more likely to deliver than other frameworks. The entry barrier is lower than in many other frameworks, and developers only need to know one language rather than multiple.

Flutter will unquestionably dominate the future of mobile app development. Flutter-based apps can be seamlessly integrated into your business model and help it grow. Just make sure to work with a top-tier Flutter app development company to reap the most benefits from your app. When you find qualified Flutter app developers, you will only get the best results. By now, you’ve probably understood how important Flutter is for your app project in 2022.