The Emerging World Of GitOps 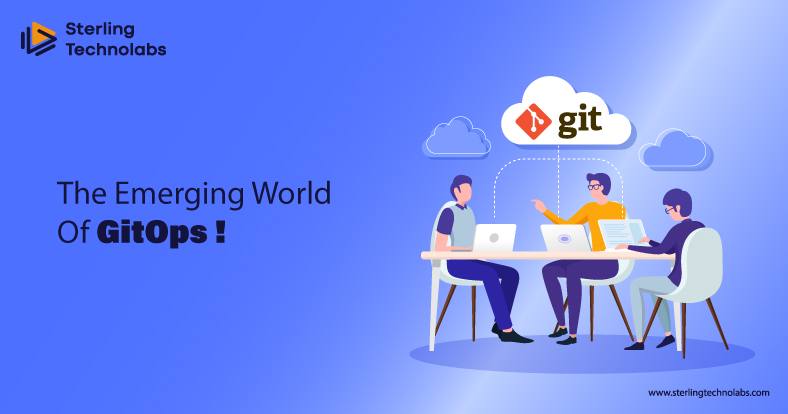 Many businesses include DevOps in their digital transformation strategy because it promotes a culture of shared accountability, openness, and rapid feedback. On the other hand, the processes are shrinking as the gap between development and operations teams closes.

So it is with Git, the world’s most popular version control system today. As more firms adopt DevOps approaches, technologies have evolved to GitOps, a set of activities that allows developers to do additional IT operations-related duties.

What exactly is GitOps?

GitOps is a code-based architecture and operational procedure that uses Git as a source control system at its foundation. It’s a DevOps best practice based on Infrastructure as Code (IaC) that uses Git as the single source of truth and control mechanism for developing, updating, and destroying system architecture. In other words, it’s the process of using Git pull requests to verify and deploy system infrastructure changes.

GitOps is a term that describes technologies that extend Git’s default capabilities and Git as a primary DevOps tools and technique. These tools were mainly utilized with Kubernetes-based infrastructure and applications operating paradigms. There is active research and discussion within the DevOps community around bringing GitOps tools to non-Kubernetes platforms like Terraform.

What is GitOps, and How Does it Work?

Assume you have all of the documentation, your YAML files, and the necessary code for Kubernetes in a single Git repository. Anyone can make a pull request, modify the code, and then issue a merge request to that Git repository with the help of some automation tools. Instead of using push-based, the automated GitOps operator determines if anything has changed after the merging request is complete. The pull-based strategy entails delivering fresh images from within the cluster using a K8s Operator (Flux).

It scans the Git repository for new pictures and pulls them into the cluster environment. The cluster credentials are not exposed outside of the production environment

as a result, this.

Today, many CI/CD solutions use a push-based deployment architecture. A push-based pipeline means that code starts with the CI system and proceeds through a series of encoded scripts or manually pushes changes to the Kubernetes cluster using ‘kubectl.’

Because of the risk of exposing credentials outside of your cluster, you don’t want to utilize your CI system for deployment purposes or do it manually on the command line. While it is possible to safeguard both CI/CD scripts and the CLI, this is not recommended, so CI systems are often referred to as attack vectors for production.

What tools did it come with?

GitOps isn’t only about the K8s; if we want to manage the entire system declaratively and apply convergence as a “whole system,” we need a cluster of Kubernetes environments, such as “dev-cluster” and “prod-cluster.” Machines, clusters, apps, and interfaces to other services such as data and monitoring are all part of each environment. We can see how Terraform can help with the bootstrapping problem in a similar case. We may construct a single control plane that underpins Kubernetes and applications via Git as a “single source of truth” using GitOps workflows with K8s and IAC(Terraform). This is a practical and valuable practice.

The Git protocol is open source, resource-light, and adaptable to various platforms and configurations. Unless you’re relying on a specific hosted Git vendor’s functionality, you can relocate your GitOps workflow wherever you want and execute processes locally, in a CI, or other ways.

Most developers are familiar with Git workflows and automated processes for testing and developing code. When GitOps is appropriately implemented, a developer pushes code to the codebase’s repository, triggering tests and deployments. All infrastructure and processes are declared declaratively by teams. Suppose someone wishes to alter what’s created or started. In that case, they edit a relevant text file (most likely YAML, JSON, or something similar), commit the change to version control using standard procedures, and update future workflows.

Closes the Gap Between Developers and Operations:

DevOps was created to bring developers and operations teams closer together and stop thinking of their tasks as so disparate and sometimes “in the way” of one another. In truth, the tools may have changed, but team relationships remained primarily unchanged. While DevOps brought a slew of new tools and processes, it didn’t necessarily resolve communication concerns. GitOps seeks to further solve this problem by bringing Ops closer to where developers work. Instead of developers and operations getting in each other’s way, GitOps allows developers to focus on their work. In contrast, operations focus on service quality, service level agreements, and other more specialized tasks.

A Clear History of Change:

Git keeps track of who made what modifications and when. Because of this record, you may view an audit trail and revert changes using any standard Git interface. Different configurations can be tested on branches, and the designs can be shared with team members if necessary.

Deployments that are immutable and repeatable:

Building on the last benefit, the nature of tracking configuration changes in Git means that any build or deployment is reproducible and immutable, making Kubernetes an ideal partner for creating the environments and building assets you require.

The cons of GitOps include:

We tend to believe that changing your technology choices can solve whatever issues your team, company, or project may be experiencing. Switching technology can assist you in identifying underlying human or product issues, but it cannot solve them. GitOps is no different. GitOps will not alter anything if your teams or team members refuse to modify their ways of working or cede their “territory.” Poorly implemented GitOps can put you in a worse position than before, depending on the processes you’re switching from.

An increase in the number of repositories:

How do you manage the repositories required to represent your application and the infrastructure that supports it as it becomes more complex?

To accommodate the frequency of changes, updates to code that are part of a continuous delivery workflow are usually automated. This might result in many automatic processes writing to the duplicate files simultaneously in big active teams, generating disputes that a human must resolve.

It’s possible to mitigate this by adding more repositories, but you’ll run into the same problems.

While there are ways for matching the status of various environments to Git (tags, branches, and so on), understanding what fits what as an application scales becomes challenging without additional tooling.

Assume you’re tasked with conducting a regulatory audit of an application. You must first determine which repository corresponds to the component, locate the configuration file that corresponds to the feature or function, and then examine the history of commits to that file to determine when and what the change was. An extensive complex program could have dozens of repositories, configuration files, and developers, resulting in hundreds of data points to investigate. You can add additional tooling, ranging from spreadsheets to observability software. However, this violates GitOps’ purported simplicity and adds work to Ops teams, which GitOps seeks to avoid.

No assistance with remote management:

Secrets (authentication and sensitive details) must be managed outside CI/CD and version control in complex business systems. GitOps does not provide a means to manage secrets because it places a Git repository at the center of infrastructure management. If all of your repositories are private, you could store secrets there, but this is generally not a good idea. Tracking down what values are where when you need to change or share them with team members grows as the number of repositories grows. Because of the lack of affordability for remote management, you’ll require additional tooling, which means more work for Ops teams.

Is GitOps the correct choice for you?

Switching to GitOps, like any other technological solution, will not solve your deployment difficulties, whether they are technical or organizational. GitOps, on the other hand, is worth considering if you currently use and are comfortable with Git and want to integrate your infrastructure specifications into the same processes. Before you do, make sure the roles and responsibilities of your development and operations teams are clear. Any underlying communication or responsibility issues will persist and possibly worsen if you don’t do this before the transfer. Prepare a strategy for scaling GitOps to larger, more complex applications. Suppose you believe that this scaling will occur sooner rather than later. In that case, you might want to investigate a different method, such as a specialized Internal Developer Platform (IDP), which combines the demands of many teams and applications into a single platform.

GitOps is a workflow pattern for managing current cloud infrastructure that is quite strong. Though the DevOps community mainly focuses on Kubernetes cluster management, GitOps solutions are being applied and published to non-Kubernetes platforms. An engineering team can benefit from GitOps by improving communication, visibility, stability, and system reliability. A modern hosted Git platform like Bitbucket is one of the most important criteria for a GitOps experience.

Related Posts: The Best Way To Use DevOps For Enterprise
How DevOps Can Speed ​​Up The Software Development Process?

Everything You Need To Know About DevSecOps

The Best Way To Use DevOps For Enterprise